started a topic over 3 years ago

So I would thought I would just provide some details about windows 10 1803 update and running QuoteWerks off a network (samba linux) connection.

We have QW in node mode running on a linux(ubuntu server) using samba. Our Our Quotewerks back end is SQL Based

As of Windows update 1803, they have removed SMB v1 from the protocols for samba. As this has many vulns to various malicious attacks.

I noticed after this windows update I could not connect (QW node connection) and was receiving the following error. 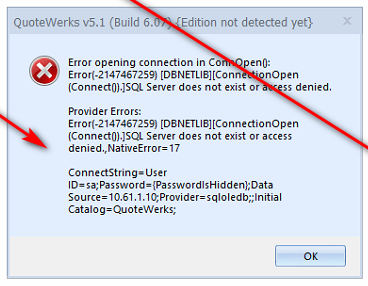 Though the error message talks about issues with database connections, this wasnt the case. I used the QW dbconnection tool to check that the windows 10 1803 computer could connect fine.

I could also ping the serverm and no changes had been made to the SQL Server recently.

None of the suggestions worked. So I had the inkling that this was due to the 1803 update made to my pc last week, but I wasnt sure what.

So googling around a LOT of people had reported issues with regards to windows 10 1803 update and issues with linux boxes running samba. In our case, we run a linux box using samba.

So, to test you can from powershell check what version on samba your windows box is connecting to a network share.

This will show what samba connections you have and specifically what dialect your connecting via.

Looking below, my dialect shows 2.0.2. Please note, this is after upgrading my Samba Server.

If your running a Linux server with samba shares, the suggested fix is to update the smb.conf file to ensure its uses a higher protocol.

In the global section of the smb.conf file, you need to specify the protocol to be at least 2

Then ensure from your windows box you have no connected samba drives. Or restart.

Now I can connect to quotewerks successfully.

Hopefully, if someone has this issue in future, it might be helpful.....

Thanks for the time taken with troubleshooting this one and posting such a comprehensive post. I'm sure this will save someone a good chunk of time if they come up against a similar issue!

Thanks, Brendan, for sharing this.  We started noticing issues with users on SQL running QuoteWerks over a network share when the 1803 update got pushed heavily the last two weeks.  I had found a Microsoft forum where other users were discussing the problem for other databases, and several had found enabling SMBv2 to seem to resolve the issue.  We had suggested it to a few users but hadn't heard from anyone yet if that resolved the situation definitively.  Thank you for confirming!

Just as a note, for anyone finding this thread, here is a Microsoft article on detecting and enabling SMB
https://support.microsoft.com/en-gb/help/2696547/how-to-detect-enable-and-disable-smbv1-smbv2-and-smbv3-in-windows-and
Don't forget to reboot every machine after changes.

Thanks for this post. I faced some problem while installing ubuntu on my windows laptop. I have done all the methods but failed. I contact with a tech site call dell printer support and solve that issue. What I faced actually after creating the memory partition when I installed the os some error occurred. If you facing this problem may contact them.

Just a general note regarding the Windows 10 1803 issues, we have seen that this hotfix patch recently released by Microsoft seems to resolve the majority of the connectivity issues:
https://support.microsoft.com/en-us/help/4284848/windows-10-update-kb4284848